There Are Worse Things Than Dying

There Are Worse Things Than Dying 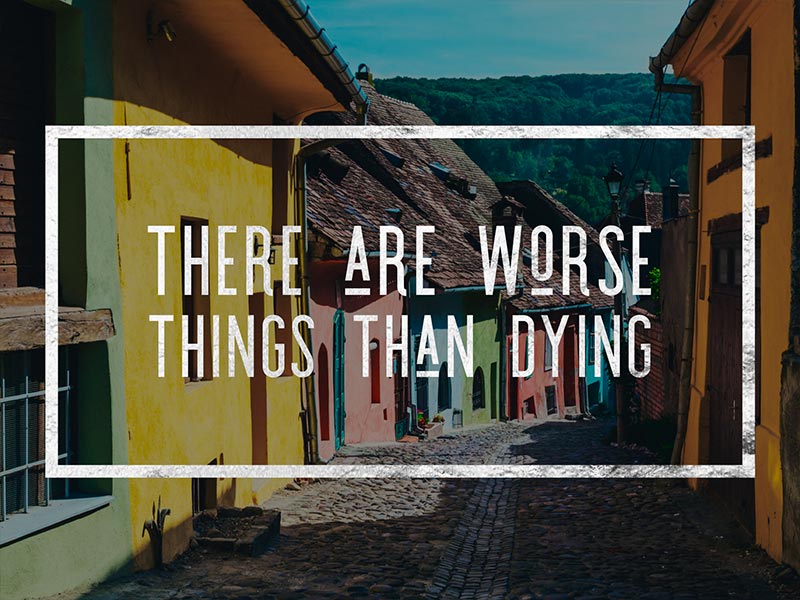 Some time ago on a mission trip to the Copper Canyon of north-central Mexico, I met an old man named Condalario. As a young man he had lost part of his arm in a mining accident. He got by doing odd jobs, lived in a cave, wore sandals made from old car tires, and nearly all of his worldly possessions would fit in a backpack. But Condalario knew Jesus. He had a smile a mile wide and was a faithful member of that Christian community. In fact, the first time I met him he was dropping off his tithe to the church leaders – a bag of lemons he had picked.

I remember a lot of things about him, but most prominent in my mind were his feet. Years of sandal-wearing in that dry and mountainous landscape, had exposed his feet to much abuse and he had cracks in his heels and feet that would have hidden the better part of a dime. A few years after I met Condalario, he went home to be with his Savior. I remember in that moment having this thought: people go to hell every day in shoes. There are myriads of people in hell who wore shoes there, and myriads of people barefoot around the Throne.

Friends, we can and should meet tangible, physical needs. In fact, Condalario was cared for in his dying days by faithful Christians working at a missionary medical outpost. But the most important thing in Condalario’s life was not whether or not he had shoes, or whether or not he had the best medical care, but it was the fact that he had been reborn of God’s Spirit.

In these days the fear of death seems to rule much of our nation’s activity. We’ve taken incredible measures since March to prevent death; and these are to be commended. But let us not forget that there are worse things than dying, namely, being separated from Christ. I pray that we, as Christians, are led to respond in two ways. First, to plead diligently in prayer that people everywhere – from our local neighborhoods to the furthest-flung nations – will come to this same realization, and that it will lead them to reach out to Jesus. And second, to plead just as diligently that God will enable us, as we step out in obedience, to be the answer to that prayer.