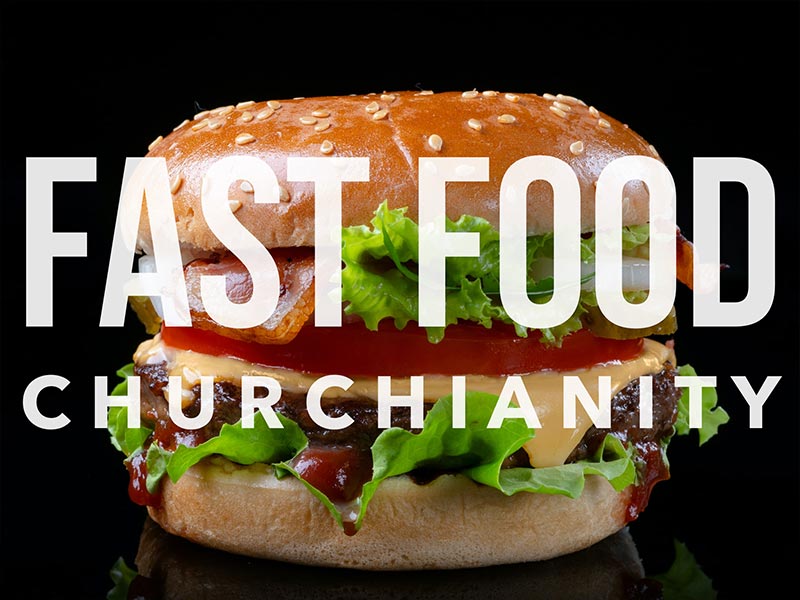 So much has been said already about Covid-19. I still chuckle when I read news stories that call it “the novel Corona virus.” Not too much is novel about it now! With some loosening of restrictions having taken place, I’ve been able to get back out on the road and into our churches and meetings with pastors and boards. With being on the road — and attending in-person services — I’m kind of melting (pun intended) two very disparate things together: fast food and churches.
I’ve been back at eating fast-food places when it’s just myself or myself and Lori. I’d rather eat well with you than just by myself. So…it’s been back to Burger King, McDonalds, Taco Bell and if I’m really fortunate Chick-fil-A (Kalispell, Idaho Falls, Boise, Cheyenne not that we’re aware of these things 🙂 A number of interesting observations have hit me again while visiting these places recently.

In my experience, Burger King is the least accurate and most prone to mistakes with an order of the three. Fries are rarely fresh — usually cold — because they’ve been sitting a while. I used to prefer BK over McDonald’s but their quality and service have dropped off like a rock from years ago. One example, the tomatoes — they used to be red! Now, more times than not, they are white and hard rather than red and flavorful. It’s an adventure eating at BK because you really don’t know how bad it will be or what you’re going to get — staff wise, food wise and restaurant wise — there’s not much consistency from outlet to outlet.

With McDonald’s, you know what you’re going to get! The order is usually right, their app sometimes has some good deals, their prices have gone up on the combo meals yet their bargain deals are still good. They pretty much do the same thing — all the time — the same way. Consistency, familiarity and fair value is what one generally expects, and gets, at McDonald’s. What’s interesting about McDonald’s is the different “cultures” between drive thru and indoor lobby service. With the changes resulting from Covid-19 and generally no in-restaurant dining, if you go into a McDonald’s you’ll hear many more loud conversations between workers, managers, etc. Sometimes this is not always good. Drive thru, still the same.

Chick-fil-A. What more need be said. If you’ve never had Chick-fil-A — it’s only food, no big deal. But if you have, and you’ve gone through the drive-thru or gone inside, it’s a different experience in fast food eating. I can only speak for me, but I have never had a wrong order or mistake that I can think of. They are exceedingly positive, very upbeat in their attitude, display a service-centric culture, have plenty of workers to navigate with customers and have “pivoted” quite well within their existing drive thru system to serve customers efficiently.

What does all this have to do with church ministry? Well, in general, perhaps you can see three “types” of churches based on the three fast food restaurants mentioned above. Some churches just kind of sling it out there like a BK. You kind of know what you’re going to get, your hopes aren’t really raised too high and you kind of just choke it down. It’s an adventure going, but not necessarily good. If there are other options, you likely would pass BK by. Probably all of us, official worker or lay person have observed, been in or attended a church that is similar. Little concern for change exists, because, well, we’ve done the Whopper since 1957 — fourteen years before the Big Mac! What’s needed here is a culture change and many, many more things. Speaking with a friend who was a “turn-around” specialist in fast food restaurants, I was intrigued by him saying the most important things he could do in turning things around quickly, at just such a place, was to be engaged, available and get down and clean the fryer — do the dirty jobs — to show work ethic and commitment! If you find yourself in just such a place of ministry — or culture — that might be some good advice!

If you’re in a McDonald’s kind of church, your great characteristic of consistency might be your undoing. If you’re decent at a lot of things, it might keep you from being great at a few. Doesn’t that seem like a double edged sword? New people come but you don’t have as good a (fill in the blank) ministry. They leave for somewhere else and you’re like, “but wait, why don’t you stay and help us make a better X ministry?” When we’re decent at many things in ministry, we may be losing the battle of doing a few things really well. There’s not as much of a hill to climb to become great, but more than likely there will be some big challenges because people in the chairs may have already settled for good rather than great. The battle here is for mindset and momentum.
If you’re in a Chick-fil-A type ministry, there are some similar and dis-similar challenges to the other two fast food restaurants. One similar challenge, I would imagine, is the whole work ethic question of the folks that work in many avenues of employment these days. It might be why the food is so much different at BK than Chick-fil-A. Each faces the problem, but how they face it sets one apart from the other. Who they hire, what training is given, how they are evaluated and what about the whole question of culture dictating the experience or does the experience dictate the culture? A dissimilar challenge would be Chick-fil-A consistently maintaining their high standards, especially in the face of great growth. Spreading a culture that is good is not an easy thing to replicate when you factor in regional differences, cultural differences and food options. YET, Chick-fil-A is able to manage it. It’s been my observation that when pastors, lay leaders, church folks look at a “successful” church, it’s easy to assume “they just made it” or “got lucky” when in reality it’s taken a lot of hard work, heavy lifting, the willingness to make mistakes AND fight for the right culture in the church. That is sometimes very hard as you have to keep one eye on what you’re doing well — and keep doing well — while having another eye to the future to be able to adapt quickly to what is coming next.

I do not presume to know how to run a fast food restaurant even though I’ve eaten in them for decades now. These are just observations from the road. Allow me to leave you with this — what are two things you can do to change/improve/move the culture of your church toward accomplishing the mission of Christ to make disciples and see them come to maturity in Him? I’d be interested to hear your thoughts. Please email any such comments to me at jwiggins@rmdcma.com.